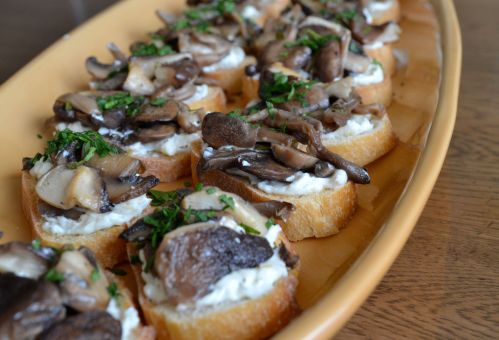 This recipe is based on Mark McEwan’s Gorgonzola Torta and Mushrooms in his book Fabrica. I cut down slightly on the calories by substituting low fat cream cheese for the mascarpone and by omitting the olive oil when making the crostini.

Mix the cheeses together until smooth. Sauté the mushrooms in the olive oil until wilted. Add the rosemary, deglaze with lemon juice, and season. Spread the cheese on the crostini and top with mushrooms. To make the crostini: Cut a baguette or ciabatta loaf into 1/2″ slices. Put them under the broiler until the top side is lightly browned. Remove from the oven, and when ready to assemble, apply the cheese and mushrooms to the toasted side. Garnish with parsley or chives.

Tags: crostini, gorgonzola, mushrooms
From: Hors d'oeuvres
← Quinoa Salad with Broccoli, Feta and Pine Nuts
Arugula and Mint Salad with Watermelon and Feta →
No comments yet