This month’s menu is late due to a two week mid-April holiday and more tweaking of recipes than usual. But the Spring ingredients Julie and I chose to feature – watercress and rhubarb – will still be here for a while.

(I am having difficulty with a new version of WordPress on this site, so my apologies if this post is looking weird. The previewed version is coming up with wonky formatting, so now I am hesitating before pressing “publish”, but will do so to avoid further delaying this post. I will look into how to fix this before next month’s menu.)

When planning this menu Julie and I agreed that watercress is a fresh and welcome Springtime flavour and we decided to make a soup which can be served hot or cold and made in advance for a dinner party. In April in the Pacific Northwest we are still waiting for the first fresh halibut, prawns and salmon (coming soon) so we decided to feature scallops this month. They are seared and placed on top of a smooth cauliflower pureé and paired with a fresh tasting mint pistachio pesto. And for dessert: rhubarb, growing now in Julie’s garden and available in local markets, is made into a compote and paired with a vanilla semifreddo, both of which can be made well ahead of time.

When I tested this menu, the appetizers I served were: blanched asparagus and arugula dressed with lemon juice and olive oil and rolled in slices of prosciutto; and radishes with hummus.

Watercress Soup
Julie and I followed Suzanne Goin’s recipe in Sunday Suppers at Lucques, a book I have referred to many times on this site. We both found that this recipe needed considerable tweaking to thicken it and to round out the flavour. My changes resulted in the recipe below, and you will find Julie’s version here.

Melt 4 tablespoons butter in a large pot over medium heat. Add sliced onion, leeks, thyme, parsley, cayenne and salt and pepper to taste. Sauté until vegetables are soft, about 5-8 minutes. Remove the thyme and parsley stems and place vegetables in a blender. Add the watercress and enough vegetable or chicken broth to blend to a smooth soup, the pour soup into a large bowl. You may need to do this in two batches. Stir in 1/2 cup of cream and season with salt and pepper to taste and a squeeze of lemon juice. Cover bowl and refrigerate until ready to serve.

Make Ahead: Can be made one or two days ahead. Serve garnished with minced chives and croutons, if desired. Please see Julie’s recipe for croutons here. 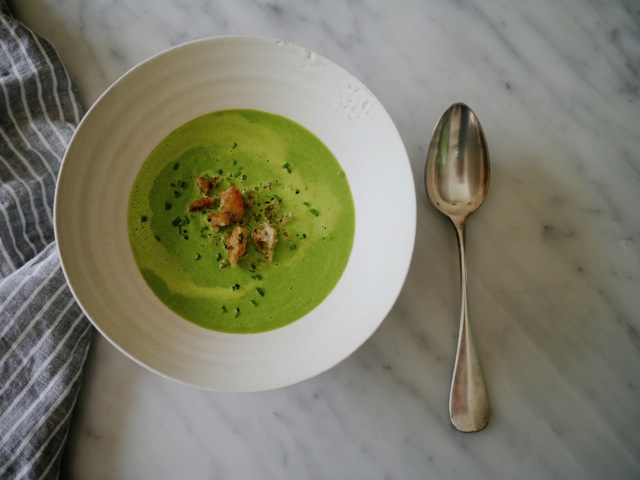 Place the florets in a steamer basket over a pot of simmering water and steam for 10 minutes until the cauliflower is tender. Remove from the basket and place in a blender with 2 tablespoons of olive oil, and salt and pepper to taste. Purée, adding additional oil as needed to reach a silky smooth consistency. Set aside.
Make ahead: Can be made and kept in the refrigerator for up to 3 days.

Mint Pistachio Pesto
This recipe is from a favourite cookbook of mine called Gjelina : Cooking from Venice, California by Travis Lett. The highlight of this book for me is the collection of recipes for condiments that add layers of complementary flavour and colour to a whole range of dishes. They can be made in advance, added to plates quickly just before serving, passed separately if desired, and they are fine replacement for heavy sauces. This one can be used on vegetables as well as fish.

Combine the mint, olive oil, lemon zest, Pecorino and chopped pistachios in a small bowl. Using a microplane grater (or other fine grater), grate the garlic into the mixture. Stir to combine and season with salt and pepper.
Make Ahead: The pesto can be stored in an airtight container in the refrigerator for up to 1 week.

Preparing scallops: It is important to thoroughly dry scallops to ensure that they brown well. Pat them dry with paper towels, pressing down on the paper to remove as much moisture as possible. This can be done early in the day and kept covered and refrigerated until ready to cook.

Season scallops with salt and pepper. Heat the olive oil on high heat in a large frying pan that will hold all of the scallops without crowding. Use two pans if necessary. Add scallops and sear on one side until dark golden brown. Turn scallops over and cook for about 1-2 more minutes, or until the scallops give a little when pressed with a finger.

Lightly oil a 9 inch loaf pan and line it with plastic wrap, tucking the wrap into the corners, smoothing it out completely with your hands. Let the excess plastic drape over the sides of the pan.In a stand mixer with a whisk attachment whip the cream at medium speed until stiff peaks form. Transfer the whipped cream to a bowl and chill until needed. Wash and dry the mixing bowl and the whisk attachment.

Split the vanilla bean in half lengthwise and using a paring knife, scrape the seeds and pulp into the mixing bowl. Add the egg yolks, vanilla extract and half of the sugar. Mix on high speed with the whisk attachment for about 3 minutes until the mixture is thick and light coloured. Transfer to a large bowl and set aside. Wash and dry the mixing bowl and the whisk attachment.

Whip the egg whites on medium speed about 1 minute until frothy. Turn the speed put to high and slowly pour in the remaining 1/3 cup of sugar. Whip on high speed about 4 minutes until stiff peaks have formed.

Fold the chilled whipped cream into the yolk mixture. Then gently fold in the egg white mixture, a third at a time. Pour the mixture into the prepared pan and tap on the counter a couple of times to release any air bubbles. Place a piece of plastic wrap over the surface, gently smoothing it with your hands. Fold the draping plastic wrap over the edges and freeze for at least 4 hours.
Make Ahead: The semifreddo can be made and kept frozen for 3-4 days in advance.

Split the vanilla bean in half lengthwise and using a paring knife, scrape the seeds and pulp into a heavy saucepan. Place the rhubarb, sugar, orange zest and water (or wine) into a saucepan. Bring to a boil and reduce the heat to medium low. Simmer for approximately 15 minutes, stirring occasionally until the rhubarb is soft and beginning to fall apart. Allow to cool, covered, before using.
In Advance: May be made and kept refrigerated for up to two days ahead.

When ready to serve, take the semifreddo out of the freezer 10 minutes ahead of time. Spoon a little of the rhubarb compote onto six plates. Cut six slices from the semifreddo and place them on the plates over the compote. Pass the remaining compote at the table. Serves 6.

With this cake, I followed my usual risky practice of making something for the first time and serving it to a group. I baked the cake the day before, added the ganache on the day it was served and carried it down the street to share with friends celebrating a birthday. I didn’t think to photograph it whole, but when it was unanimously judged to be blog-worthy, our host (thank you, David!) got out his iPhone to capture what remained: see the celebratory table and the candle holes left on the cake. END_OF_DOCUMENT_TOKEN_TO_BE_REPLACED